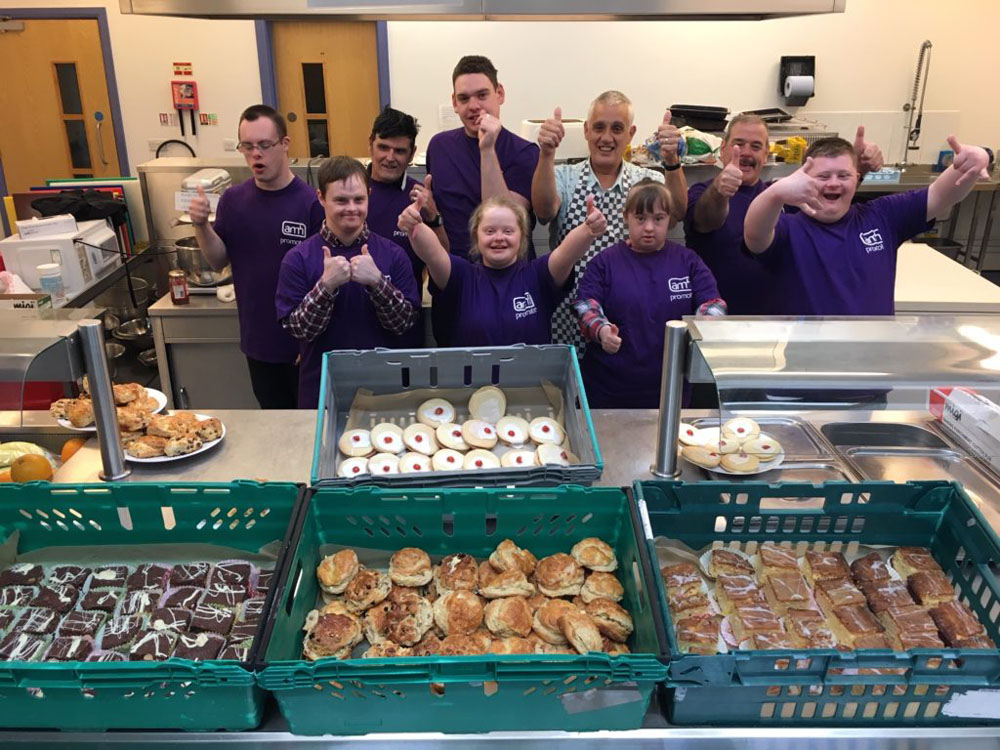 Clients at Action Mental Health Promote have been treating the cast and crew of a major national TV show to delicious treats during their hard-earned break time.

Presenter Nick Knowles and his DIY SOS Big Build team arrived in Bangor last week to kit-out a home for a local family with special health needs, and washed down their coffee at break-time with delicious traybakes made by the clients from AMH Promote.

AMH Promote provides opportunities for adults with a learning disability to be socially active and develop new skills in a supportive and engaging environment.

Nick Knowles and his team were fittingly attired in their trademark ‘purple shirts’ – the same branding colours of Action Mental Health – with the project marking the SOS show’s first ever Big Build in Northern Ireland.

The show was filming the transformation of the McCreight family house in Bangor, home to Mandy and Davey and their teenage children Ben and Kara.

Clients were star struck meeting the familiar TV face of Nick Knowles and his team, including DIY SOS build manager Mark Millar, a native of Bangor who was ‘over the moon’ to be back on home turf.

The gang from Promote were filmed handing over the traybakes, so hopefully they’ll make the finally editing cut and appear on the popular show when the episode appears on our screens in the autumn. The clients had to explain to Nick exactly what a traybake was after he said he hadn’t heard the term for the delicacies loved by the sweet-toothed Northern Ireland community.

AMH Promote Service Manager Niaobh Adams said clients were delighted to meet the DIY SOS team. “There was great excitement among the clients, getting to meet with Nick Knowles and the Purple Shirt team, especially since purple is our colour here at Action Mental Health.
“They all worked very hard in the kitchen, making a variety of tray bakes to make the cast and crew’s break time all the more enjoyable.  It was a great day for everyone at AMH Promote.”

The public can taste the tray bakes that the DIY SOS crew sampled during Promote’s regular coffee mornings that take place on the last Thursday of each month, the next one taking place on June 27.