A Review of Mental Health Policies in Northern Ireland

As Ulster University launched a new review of Northern Ireland’s mental health policies, it has been revealed that waiting lists for services in Northern Ireland are now 24 times greater than in England and Wales combined.

showed that as of March 2019 approximately 120,000 people of all ages in Northern Ireland were waiting over a year for access to health services.

The UU policy review, launched in conjunction with Action Mental Health, is a call to action for a ten year mental health strategy in Northern Ireland – the only UK region without one. It comes in the face of rising suicide rates and a system delivered in a fragmented and piecemeal manner.

The figures, obtained by the University, cast a damning light on health services here in Northern Ireland in comparison to similar statistics for England and Wales combined, where approximately only 5000 people were waiting for over 12 months.

Last November the Co Down born singer, who has suffered from depression in the past, hit out at politicians over the impact on mental health services of the absence of a functioning devolved government at Stormont.

Report author, Professor of Mental Health Sciences at Ulster University, Professor Siobhan O’Neill said: “The evidence suggests that in NI there is an urgent and compelling need for a fully costed, mental health strategy as current provision is fragmented, under-funded and overstretched. We need a long-term commitment to address the changes required.” 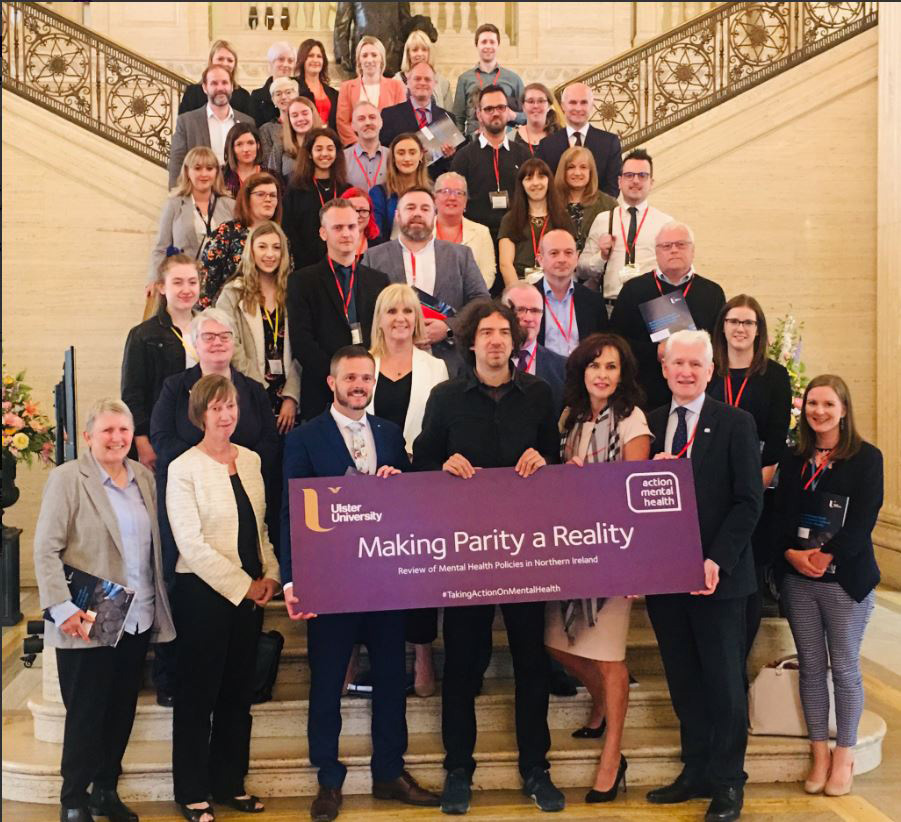 Commenting on the latest figures for waiting times in Northern Ireland, Professor Deirdre Heenan, Ulster University, said: “Waiting times for services here have become even worse relative to Wales and England – largely because both regions have made progress in reducing their long waits, whereas Northern Ireland has not. The impact of this extensive waiting on a patient’s mental health and well-being, and on their families, can be only negative, indeed a recent report by the Children’s Commissioner explained how vulnerable young people talked about their mental health deteriorating, for some to a crisis point, as a direct result of the delay in being able to access services.’

“A patient on the waiting list in Northern Ireland is at least 36 times more likely to have been waiting for more than a year compared to Wales, and more than a thousand times more likely to have been waiting over a year than a patient in England. This is simply not acceptable. For too long mental health services have been an afterthought in Northern Ireland. If the health service is to become more efficient, it is vital that physical health and mental health are integrated.”

The launch of Making Parity a Reality heard calls for a fully costed, ten year mental health strategy with clear targets, aligned to other health strategies, with spending, as a percentage of the overall Northern Ireland health budget doubled to at least 12%, on par with spending in England.

Campaigners are also calling for the Protect Life Two suicide prevention strategy to be urgently implemented, to help reverse Northern Ireland’s suicide rate and for better crises services. The rate of suicide here outstrips all the other UK regions, indeed in 2017 it was more than double the rate of England, standing at 18.5 per 100,000 people compared to 9.2 per 100,000 in England.

Action Mental Health Chief Executive David Babington welcomed the new review, stating: “Northern Ireland’s policy makers need to be ambitious as the mediocre approach that’s been delivered up to now is not good enough. Mental health has for too long been the Cinderella service of the NHS and despite an increased focus and awareness in the area of mental health, as championed by the likes of Action Mental Health, many key challenges remain.

“There are a number of systemic barriers that limit the mental health sector in providing consistent high-quality care, from inconsistent variable commissioning of services, increasing demand and inadequate funding, to the lack of integration with other services. Northern Ireland urgently needs a joined-up approach.”

Dr Gerry Lynch, chair of the Royal College of Psychiatrists NI and a Board member of Action Mental Health said:  “We would like to see parity for Mental Health made real by the commissioning of services currently unavailable or under provided in Northern Ireland, as well as access to crisis services and a targeted increase in trained staff.

“Funding must be put in place in any plan and we need access to data in order to judge progress. This further contribution by Ulster University to the public discussion on mental health is most welcome and we are delighted to support this launch.”

Making Parity a Reality calls for a more holistic approach to health services, with a greater focus on prevention and early intervention to reduce the long term impact for people experiencing mental health problems and their families, and to reduce the costs for the NHS and emergency services.

The review calls for Northern Ireland’s high waiting lists to be presented in relation to their impact on mental health and for a new emphasis on creating mentally healthy communities. Urging politicians and policy makers for greater innovation within Northern Ireland’s devolved administration, the review calls for strategic leadership roles for people with lived experience of mental ill-health.