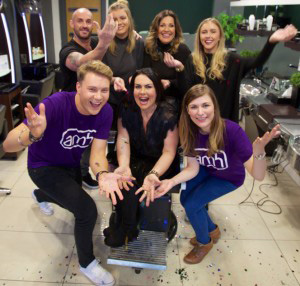 This Christmas, we have joined forces with local public figures and health authorities to launch a digital campaign that urges aspiring party leaders to address the mounting challenges facing mental health facilities in Northern Ireland.

The social media campaign, entitled ’12 Christmas Wishes’, involves a series of video messages from local personalities, MLAs, academics, health professionals and service users, who each make a wish for better support and acceptance of people living with a mental health condition.

Following our “Regress, React, Resolve” research, which documented an underspend of 26% in mental health services between 2008 and 2014, the campaign highlights the imbalance within current funding structures which is jeopardising the wellbeing and social integration of mental health patients.

“Looking towards the Northern Ireland Assembly Elections in May 2016, we are asking on behalf of our clients, their families, our staff, and the voluntary sector, that the new Assembly and Executive commit to resolving the challenges facing mental health services in Northern Ireland.

“Each day from the 11th until 22nd December, we will be sending out a Christmas Wish via social media based on the key recommendations created by our Research report.

“It’s hugely important for people to understand that those living with a mental condition are not simply problems to be managed, but are individuals in their own right and are often in desperate need of help.

“Whilst we recognise there are huge financial pressures on the local government, it is no excuse to treat mental health provision as the Cinderella service of the NHS, with patients paying the ultimate price in regards to the decline of their health due to lack of fundamental resources.

“Our ‘12 Christmas Wishes’ therefore seeks to redress the balance between physical and mental health support, which we hope will motivate the government to not only stand up and listen, but take action by resolving current struggles.”

Previous studies have shown that Northern Ireland has some of the poorest mental health ratings in the UK and Ireland, with an estimated one in five people here suffering from a mental health illness in their lifetime (Public Health Agency, 2014).

In addition, participants in our most recent study expressed feelings of increased social isolation, stigmatisation, and frustration with the current system, due to lack of understanding and investment in resources, education and professional training.

Prominent businesswoman and mental health advocate, Brenda Shankey is one of the key speakers involved in this year’s 12 Christmas Wishes. When asked why she wanted to take part, she said:

“I support Action Mental Health’s Christmas Wishes Campaign because it’s a charity that lies close to my heart.

“I deeply admire what AMH is trying to achieve in regards to building a better future for those under the care of mental health services by drawing the public’s attention to such an important issue.

“Despite how common it is, mental health is sadly overlooked so often due to the social stigma attached to it, which I find completely incomprehensible. Although we have come a long way in terms of educating people on what mental illness is, a lot more needs to be done to increase awareness and support for clients and indeed society in general.

“If you have a broken leg you get it fixed, but because we can’t see a mental illness it’s more difficult to recognise – yet I feel it’s a growing problem and more help is needed for diagnosis and treatment solutions.

“So with that said, my Christmas wish is to encourage more government funding for solutions to an ever increasing problem.”

Taking place from 11th – 22nd December, you can follow our 12 Christmas Wishes campaign by following @AMHNI and using the hashtag #12ChristmasWishes.

Alternatively you can access the videos via facebook.com/amhni or www.amh.org.uk