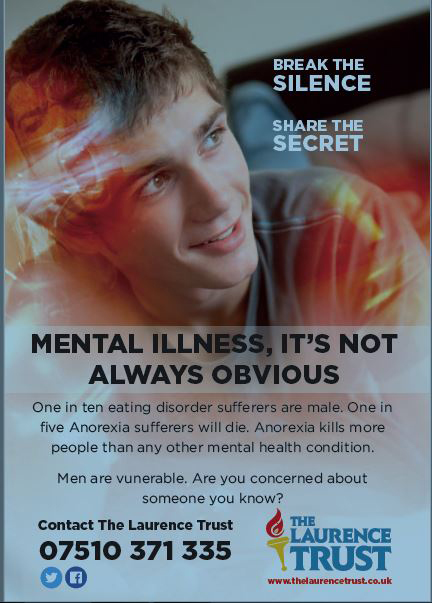 Eating disorders are not solely the preserve of females, and today, during Eating Disorder Awareness Week, we highlight the increasing incidence of eating disorder amongst males in Northern Ireland. Statistics show that of those treated for the range of conditions, some ten per cent are estimated to be male.

As Eating Disorder Awareness Week continues, males living with a related condition have a dedicated service to turn to in Northern Ireland – the Laurence Trust. The Trust is a local charity founded to help boys, teens and men suffering from eating disorders. It was founded by the grieving parents of Carryduff man Laurence Nugent who died in September 2009 following an eight year battle with bulimia.

The Trust, which provides information and links to support and a helpline, reveals Laurence’s heart-breaking story…

“Laurence was a healthy boy who grew into a well-built athletic young man, 5ft 7in tall and weighed around 11 stone. Like his brother Christopher, Laurence regularly played his much loved game of football for the local club from the age of 12 years, up until 6 months before he passed away. Laurence was a valued member of the team and a good friend to all his teammates.

Like many of his friends, Laurence was a huge Manchester United supporter – going to games in Manchester, and watching practically every match he could in the local pub with his close circle of friends, and his brother Christopher who shared Laurence’s passion for both football and Man United! As well as being brothers the two boys were best friends. Wherever Christopher was Laurence was always there too!

In his short life Laurence also had two long term relationships, both ladies whom he very much loved and admired, and became not only his partners but also his good friends. They were extremely sad when he passed away.

Laurence himself told us shortly before he tragically died that he had struggled to manage his eating disorder from the age of 16 years old, but we did not notice his problems for a number of years, only becoming obvious to us when he was around 21 years old, and began to lose a significant amount of weight despite eating a full and healthy diet.

He had began to eat ‘on the hour every hour’, having an insatiable appetite. Our first thoughts were that he was diabetic or had a terminal illness such as cancer- how could a young healthy man eat so much and yet lose so much weight?!!!! It wasn’t long before we began to notice that he would also regularly go to the toilet during and between meals- we noticed stains in the toilet. It still had never crossed our minds that Laurence could be bulimic.  Looking back now, we remember that from a young age, Laurence would have regurgitated his food sometimes after eating. At the time, however, we thought he had eaten too much too quickly – you don’t expect an eight year old to have an eating disorder.

Through the course of his illness Laurence became depressed, and found life itself hard to cope with at times. But Laurence, the strong, proud young man that he was, never let it show to the outside world. He still went out with his friends, played football, and he still held down a job – working as a care assistant to people including young people with mental health difficulties, and eating disorders just like himself.

There were visible signs that Laurence was suffering – his weight loss, he drank more than he should have, he became over-sensitive to the point of paranoia about the smallest  things. We noticed a change in his personality, he was angry about everyone and everything, easily irritated, argument after argument was a nightly occurrence in our home: shouting, anger, the tension was immense. Very quickly Laurence in his mind felt his Mum and Dad were his enemies as his suffering increased. Through the despair and worst times, Laurence attempted suicide – he tried 3 times and 3 times he failed.  Laurence himself told his Mum shortly before he passed away at his lowest times he would vomit as much as 25 times a day, in a continuous vicious yet unbreakable cycle of eating, drinking, and making himself sick (purging).

During his last few years Laurence along with his Mum and Dad sought to get help from his local healthcare services, but they didn’t seem to understand. This young man had to work up the courage to seek help, he was humiliated and embarrassed, only made worse by the fact that he worked as a care assistant within the local mental health setting which he himself now needed.

There was no obvious or immediate help for Laurence – why?  Because we didn’t know who or where to turn to. When we sought out help from the local GPs they didn’t understand or take the time to listen to Laurence or offer the appropriate support to help Laurence manage his suffering.  Laurence’s suffering was invisible you cannot see into the brain the way you can see a cut, and he suffered in silence.

For his family this was the most difficult part- we watched him eat, vomit, eat, vomit and lose weight, we listened to him cry so many times in utter despair, and we were so afraid of how this would all end – we were living every parent’s nightmare – you love your child regardless of their age and when they suffer, you suffer too!  As a family we felt helpless, we knew very little about bulimia or depression, we just didn’t understand.

On the evening of Tuesday 29th September 2009 Laurence went to bed, complaining of a pain in his chest, we ourselves thought this was as a result of muscle strain due to constant vomiting, but unfortunately we were wrong. Laurence suffered a major heart attack in the small hours of Wednesday 30th and passed away, he was 24 years old.”

Read more about the work of the Laurence Trust here https://www.thelaurencetrust.co.uk/