For the second year running, Action Mental Health has triumphed at this year’s CIPR Pride awards by winning Gold in the coveted Healthcare and Public Affairs categories for its ambitious Regress, React, Resolve campaign.

As a direct result, the Northern Ireland Executive has pledged to improve mental health provision in the forthcoming Programme for Government, which has been hailed a milestone achievement by clients, organisations and healthcare professionals alike.

“We are honoured to be recognised by the Chartered Institute of Public Relations for our efforts in driving the mental health agenda forward and ring fencing government funding for support services in Northern Ireland.

“We are proud to have been shortlisted amongst some of the largest and most successful communications agencies across the province and humbled to have been awarded first place in two categories. This serves as a testament to the talented and resourceful communications team we have in Action Mental Health, who I personally would like to thank for making this campaign a huge success through their hard work, dedication and creativity.” 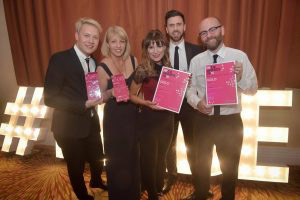