AMH New Horizons Downpatrick was proud to present its foray into the film making world when it premiered a movie made by its clients, focusing on the changing face of Downpatrick from the 50’s to the 80’s. The film, called ‘Downpatrick, Life in the 1950s – 1980s’, which was made entirely by clients of AMH New Horizons, Downpatrick, had its premier at Eclipse cinema in the town, marking the culmination of five months’ work.

Speaking at the launch of the film, which features interviews with local civic leaders such as Maurice Hayes, and well known local characters, Joanna Miskelly of Action Mental Health said that she was immensely proud of the film,

“The clients were responsible for directing, producing and interviewing the local characters who feature in the film. The final piece is a credit to their hard work and dedication.This project has been a real inspiration to those involved.”

The film has been supported and funded by the PEACE III Programme managed by the Special EU Programmes Body and delivered by the North Down, Ards and Down District Council cluster. The community history project organised by Down County Museum and the Somme Heritage Centre has seen 20 community groups from Down, North Down and Ards engaging in a series of educational activities designed to promote greater understanding of local culture and traditions and enhance awareness of cultural identity and diversity in the region. The clients wanted to do something which they could be directly involved in, which was going to challenge them and which would also be fun!

Joanna said the project grew from there, 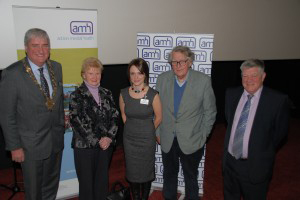 “Initially we were going to look at one decade in the history of Downpatrick, but as we examined them individually, it was evident there had been quite a bit of change, so the clients thought that it would be more interesting to look at Downpatrick from the 1950’s – 80’s and in doing so, see how it has changed. Clients thought that interviewing characters who had actually lived and worked in the town during this period would give us a ‘birdseye’ view of how the town was and how it has changed over the years.

From its inception in 1963, Action Mental Health has grown to become one of Northern Ireland’s leading mental health charities, providing services to over 1700 people across Northern Ireland every year. The organisation works with people from all backgrounds to enable them to recover from mental illness so that they can enjoy an improved quality of life. The New Horizons project helps people overcome the effects of mental ill health, and in many cases return to work. It offers a range of projects and qualifications, providing training, personal development programmes and social projects.

You can watch the film below:-

we have more photos of the event courtesy of the Down Recorder click on this link: http://www.flickr.com/photos/actionmentalhealth/sets/72157625885895535/